There is no such thing as unsuccessful rotating Presidency of the Council of the European Union – this rather humorous maxim, which is widely popular among academic and political experts on European affairs, has the potential to discourage any attempt at evaluating the Presidency. END_OF_DOCUMENT_TOKEN_TO_BE_REPLACED

On October 14-15, 2021, the Department of European Studies held its Eighth International Scientific Conference, named "The Call for More Europe - Ambitions and Realities". END_OF_DOCUMENT_TOKEN_TO_BE_REPLACED

The paper "Strategic Autonomy - the New Project of the European Union" by prof. Ingrid Shikova was published in "Diplomacy Journal”- 25/2021. The article focuses on the concept of strategic economic autonomy, which is becoming an increasing need for the EU as a result of the lessons learned from the Covid-19 crisis. END_OF_DOCUMENT_TOKEN_TO_BE_REPLACED

The collection of papers from the fifth joint doctoral conference of Department of European Studies, Department of Political Science and Department of Public Administration on the topic "The European Union and the new normal - from social isolation to civic awareness" has been published. It took place on 21st November 2020. END_OF_DOCUMENT_TOKEN_TO_BE_REPLACED

The Fourth International Conference “Rethinking the European Union”, organized by Sofia University “St. Kliment Ohridski”, European Studies Department, “Jean Monnet” Center of Excellence with the support of “Erasmus Plus” Program of the European Union and “Hanns Seidel” Foundation, took place in Sofia, EU House, in May 2017.

The event focused on topics related to the recent developments and challenges of the European Union, such as Brexit, the migration crisis, the debate on the Future of Europe.

The conference had a focus on the Western Balkans region, with many participants from the candidate and prospective candidate countries from the region – Serbia, former Yugoslav republic of Macedonia, as well as Turkey. There were also lecturers from the larger South-East European region, which is the primary focus of the research and activities of the Jean Monnet Centre of Excellence. 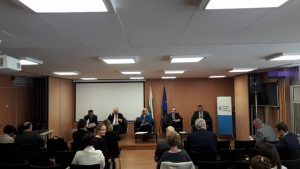