On October 14-15, 2021, the Department of European Studies held its Eighth International Scientific Conference, named "The Call for More Europe - Ambitions and Realities". END_OF_DOCUMENT_TOKEN_TO_BE_REPLACED

The paper "Strategic Autonomy - the New Project of the European Union" by prof. Ingrid Shikova was published in "Diplomacy Journal”- 25/2021. The article focuses on the concept of strategic economic autonomy, which is becoming an increasing need for the EU as a result of the lessons learned from the Covid-19 crisis. END_OF_DOCUMENT_TOKEN_TO_BE_REPLACED

The collection of papers from the fifth joint doctoral conference of Department of European Studies, Department of Political Science and Department of Public Administration on the topic "The European Union and the new normal - from social isolation to civic awareness" has been published. It took place on 21st November 2020. END_OF_DOCUMENT_TOKEN_TO_BE_REPLACED 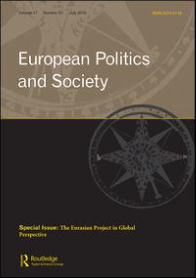 Student Simulation game on next MFF

A simulation game of the students of the Class of William Shakespeare of the Dept. of European Studies took place on 8 May 2018 in the framework of the Jean Monnet CoE. The topic of the game is the negotiations of the next MFF. The students did not achieve consensus on the funding of the CAP and Cohesion Policy, but agreed to double the funding of the Erasmus Plus Programme. The simulation game took place at the National Assembly. END_OF_DOCUMENT_TOKEN_TO_BE_REPLACED

Prof. Georgi Dimitrov on the next MFF in Offnews.bg

Prof. Georgi Dimitrov on the new EC proposals for the next MFF and the protection of the Rule of Law - today in Offnews.bg web media. https://offnews.bg/nashite-avtori/biudzhet-sreshtu-zloto-679883.html

Prof. Shikova comments on the accession to the Euro-area

The criteria are important, but trust is key: Prof. Shikova comments on the accession to the Euro-area for the online media Debati.bg, as well as on the European perspective for the Western Balkans and the forthcoming EU-Western Balkans Summit. The full interview is available here: in Bulgarian. https://debati.bg/spetsialno-za-debati-bg-prof-ingrid-shikova-za-evrozonata-kriteriite-sa-vazhni-no-klyuchovo-e-doverieto/

Forum "Future of Europe", organised by Europe Direct and Municipality of Sliven took place in Sliven, Bulgaria this week. Prof. Shikova delivered a lecture on the European perspective of the Western Balkans and the EU budget post 2020 in the context of the first Bulgarian presidency of the Council of the European Union 2018. END_OF_DOCUMENT_TOKEN_TO_BE_REPLACED

Sofia University “St. Kliment Ohridski”, European Studies Department, “Jean Monnet” Center of Excellence with the support of “Erasmus plus” program and “Hanns Seidel” Foundation organise: United We Stand Strong, Fifth International Conference On 1 January 2018 Bulgaria took over the rotating Presidency of the Council of the European Union in a complicated and dynamic period, when important decisions are to be made. As a head of the rotating Presidency Bulgaria aims to achieve its set of goals through three easy-to-remember approaches, that comprise the three most salient areas for the future of the EU. They have become popular as the three “C”: consensus – competitiveness – cohesion. Competitiveness is crucial for the economic prosperity of citizens; cohesion is a precondition for a socially stable European Union, while consensus is necessary for the unity and progress of the EU. We shall not forget the forth “C” that stands for culture since culture is what distinguishes Europe as a hallmark for civilization. The motto of the Bulgaria presidency “United we stand strong” is also the title of the Fifth international conference of the European Studies Department. The main aim of the conference is to contribute to the priorities of the Presidency: END_OF_DOCUMENT_TOKEN_TO_BE_REPLACED

Today the minister, responsible for the Bulgarian Presidency of the Council of the European Union in 2018, Mrs. Liliana Pavlova, publicly presented the position of Bulgaria on the political priorities of the Bulgarian Presidency. They are based on the concept of the “Three Cs”- competitiveness, cohesion, culture”, elaborated by Prof. Ingrid Shikova. Information about the public position can be found in the Bulgarian media here and here. The concept, elaborated by Prof. Ingrid Shikova can be accessed in the weekly analytical commentaries, published by our CoE project team members – here.

Will Brexit have a domino effect on the EU or the opposite - consolidate the Union further? See the various expert positions on the topic in the commentary on the Bulgarian National television

Is there an alternative to multi-speed Europe?

What is the future of the EU and is there an alternative to multi-speed Europe? Prof. Ingrid Shikova discusses the topic on TV Evropa

Who will take UK's role as a constructive critic of EU policies after Brexit? How will the EU commemorate the anniversary of the Treaties of Rome and what is the objective of the March for Europe? See in Prof. I. Shikova's interview for Bloomberg TV.